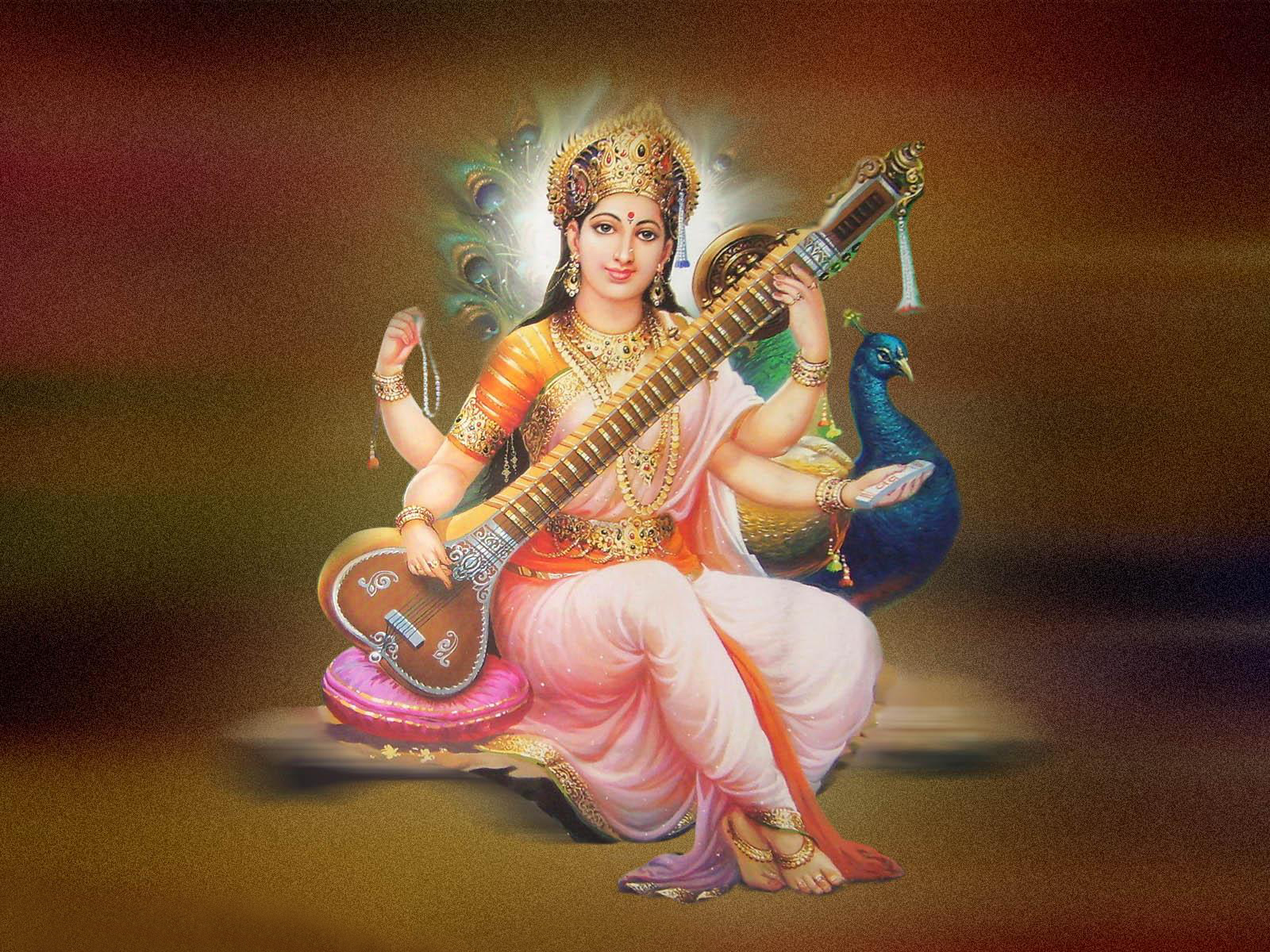 This article is written by Astrologer Amritendu Mukhopadhyay.

Goddess Sarasvatī is one of the few Vedic Goddesses who is still worshipped widely. She is the Goddess of knowledge, art and culture.

We first find her name in the Ṛg Vedas (Samhitā). She was the personification of the river Sarasvatī. River Sarasvatī was the most sacred river in the entire Āryāvarta. It used to flow from the Himalayas to the Arabian sea. Vedic sacrifices used to take place on the bank of this river. The heart of Āryāvarta was known as Brahmāvarta (modern-day Kurukshetra). It was the land between the river Sarasvatī and one of its tributary known as Dṛṣadvatī.

There are three Suktas in Ṛg Veda dedicated to Sarasvatī (VI.61, VII.95, VII.96). Besides that, numerous individual Ślokas mention her (For example, I.3.10-12, II.41.16). From those descriptions, we understand that it was indeed a mighty river.

“With enraged snortings, like one who digs up lotus roots, this one broke the back of mountains with her strong waves.” – VI.61.2

However, something interesting happened in the age of Brāhmaṇas. The river Goddess transformed into the Goddess of speech. There she was identified as Vāgdevī. Phrases such as “Vāg Vai Sarasvatī” or “Vāg Eva Sarasvatī” were frequently used. These phrases emphasize the oneness of the meaning of the two words. For example, in Jaiminīya Brāhmaṇa, there is the following passage –

(Their initiation is done after the completion of bath in the Sarasvatī, which is taken on the right bank after the initiation ceremony. They approach Sarasvatī. Sarasvatī is indeed speech.)

The story of this transformation is fascinating. There was a separate deity known as Vāc in Ṛg Veda. She was mentioned in only one Sukta – the Devīsukta (X.125). It is a very famous Sukta because it contains the seed of Sākta tradition that flourished later. Anyway, Vāc was the presiding deity of speech.

Now the question that intrigues us, why these two deities got merged. There are many theories. But the two most fundamental reasons are as follows:

In the age of the Mahābhārata, Sarasvatī directly became the Goddess of knowledge. This is not because she is identified with Vāc; she no longer needs the mediation of Vāc. Now she presides over knowledge directly. In Mahābhārata (12.326.5), Nārāyaṇa says to sage Nārada:

“Behold Goddess Sarasvatī, the mother of the Vedas, established in me

Thus gradually, Vāc lost in oblivion; and Sarasvati became the prominent deity. This is the final step in the identification process.

In Mahābhārata (12.330.10), Sarasvatī is described as the daughter of Brahmā. In the Purana, she also becomes his consort.

One of the epithets of Sarasvatī is Bhāratī. Puṣpānjali mantra of Devī Sarasvatī mentions her as Bhārati (“bhagavatī bhāratī devī namaste”). Again Bhāratī was a separate deity in the Ṛg Veda. The triad of three deities Bhāratī, Iḷā/Iḍā and Sarasvatī, usually was invoked together in sacrifices. Later Bhāratī got merged with Sarasvatī. Probably this merger happened because Bhāratī was also identified with Vāc in Bṛhaddevatā (5.101, 3.12).

(O best mother, best river, best Goddess Sarasvatī- we are like ones unlauded: make a laud for us mother) Ṛg Veda II.41.16