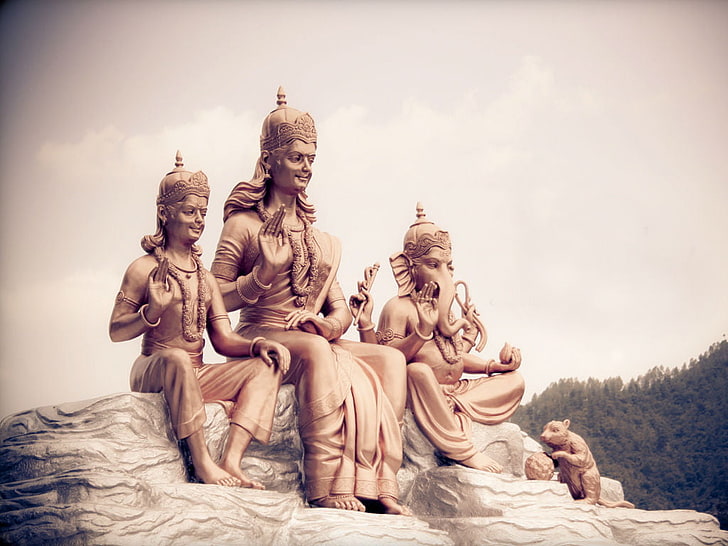 Father is one of the most important figures for anyone. Especially within the Hindu traditions, he’s accorded an almost divine status, especially for his Child. There can be many definitions of as to who, what, in which situation or how, any person constitute or can be called as “Father – Pitā ( पिता )”

The more common term one might encounter used for father, is Pitṛ (पितृ) – but that is not just limited in terms of meaning to the sense of “father”. Therefore, We are posting here a more generic list of “definition & qualities” of father from major canonical texts.

Definition 1: From the Vedanga based ‘Nirukta’ by Yāskācārya

Yāska basically gives two definitions or etymology for the word in the Nirukta:

The one who sustains, nourishes and protects is thus known as Pitā (father).

Therefore, the etymology thus derived as:

According to the Nirukta – a father (Pitā) is someone Who Protects, Sustains & Nourishes.

Definition 2: From the Vālmīki Rāmāyaṇa

In the Vālmīki Rāmāyaṇa, Book IV: Kiṣkindhā Kāṇḍa – The Empire of Holy Monkeys: Chapter 18,
Śhrī Rāma himself explains to Vāli – who is to be called as a “Father – Pitā

“It is to be known by him who treads the way of righteousness that he has three fatherly personages, namely his own father, his elder brother, and the one who accords education to him. [4-18-13]

“An younger brother, a son, and a disciple with good characteristics, these three are to be deemed as one’s own sons, for such matters take base on rectitude alone. [4-18-14]

Therefore according to the Rāmāyaṇa, reconciling the above two verses – 13 & 14, conclusions are reached, scripturally: the Elder brother, the Biological father & the teacher (Ācārya) for a person are all to be equivalent to Pitā (पिता).

Definition 3: From the Mahābhārata

In the Adi Parva (1.93.25) of the Mahābhārata, we again get three types of people qualified to be called Pitā, as per Ṛṣi Kaṇva:

First, the one who contributes to our body be conceived via the garbhādhāna saṃskāra, Second, the one who has saved our lives or protect us (abhayadānam), and Third, the one who provides for our food and necessities – all these three as designated to be called as Father – Pitā.

Bhīṣma gives Yudhiṣṭhira the exact same definition as above in the Anuśāsana Parva: Chapter 69:

He who procreates a person, he who rescues a person, and he who assign a means of livelihood to a person, are considered as the three fathers.

Thus, according to the Mahābhārata – one’s own biological progenitor, the one who Protects, and the one who Sustains – these three are to be called Pitā.

Definition 4: From the Brahmavaivarta Purāṇa

In the Chapter 10: Jāti-Sambandhaṃ-Nirṇayo from the Section I: Brahma Khaṇḍa in the the Brahmavaivarta Purāṇa, we get another definition on the above similar lines:

The father-in-Law of one’s own sister and that of one’s Sister-in-Law – both are equivalent to be treated as one’s own “Father (Pitā)”.

The one who gives birth (biological father), the one who provides food (Sustains), the one who releives from danger (gives Protection), one’s Wife’s Father, and the one who imparts knowledge (Guru or Ācārya) – each one amongst the five of these is worthy of being called a father – (*Pitā/Pitṛ)”.

According to Brahmavaivarta Purāṇa – one’s biological father, the Sustainer-Nourisher, the Protector, ones’ Teacher, the father of Wife, the Father-in-Law of both sister and sister-in-law are to be accorded the status of a “father (Pitā)”.

Manusmṛti [ Verse 2.146 ], gives a more situation-based “exhaustive” definition for the word – Pitā (पिता), especially in reference to a dvija:

Between the progenitor and the imparter of the veda, the imparter op the veda is the more venerable father; for the brāhmaṇa’s “birth” is the veda, eternally,—here as well as after death.—(146)

Thus, both the biological father and the imparter of the knowledge of the Veda (one’s ‘Āchārya’) are to be referred to and considered as Pitā (पिता). However, the situation varies, as Medhātithi explains in his Manubhāṣya:

‘Progenitor’—is one who gives natural birth; ‘Imparter of the Veda’ is one who teaches;—both these are ‘fathers’; and between these two ‘fathers,’ that Father is ‘more venerable’ who imparts the Veda. So that when the Father and the Preceptor are both present, the Preceptor should be saluted first.

The text adds a valedictory statement in support of what has been said—‘The Brāhmaṇa’s birth is the Veda’; i.e., is for the purpose of learning the Veda;

5(a). Thus, the one who’s responsible for our physical birth is to be taken in the material sense of being as a Pitā, i.e, a progenitor who gives a Natural birth is the ‘Bhautika or Sāṃsārika Pitā’.

5(b). However, for a “Dvija”, i.e., the twice-born, it’s the ‘Āchārya’ who initiates them into the knowledge of Vedas, which is what actually constitutes their “second-birth”. Therefore, in the Spiritual & Metaphysical perspective, an ‘Āchārya’ is the pita i.e, ‘Imparter of the Veda’ i.e., one’s ‘Āchārya’ – may be called as the ‘Ādhyātmika or Brahmavid Pitā’.

These five have been ordained to be called as Pitā – the biological father, the one who initiates into the Vedas, the one who imparts Education, the one who provides food and necessities, and the one who Protects i.e, ‘Pālanahāra ( पालनहार )’.

One’s biological progenitor, Vedic rites initiator, Teacher (Guru), and the Sustainer and the Protector – these five are designated as the status of Pitā ( पिता ).

Definition 7: From the “Historical” Etymological Perspective:

The occurrence of the word ‘Pitā’ is rare in the Vedic literature, however, the word Pitṛ is encountered several times, albeit with myriad etymological connotations.

In their work: Vedic Index of Names and Subjects [by Macdonell, Arthur Anthony, 1854-1930; Keith, Arthur Berriedale, 1879-1944], the authors have given the following analysis, noting the following (wrt. words based on ‘pa -Pitṛ’ roots):

Thus in the Vedic literature, there doesn’t seem to be much “definition” given for Pitā. The word used mostly is Pitṛ, which changes connotations as per convenience. The basic definition for Pitā might be eschewed as – The Protector, the dearest of all (or Gods), the Nourisher/Sustainer.

Thus, basis the above discussion we conclude that for a person, anyone from the below list is worthy of being referred to as a “Father – Pitā ( पिता )”:

Source : Based on Answer of user “ChandAl” at Hinduism SE.