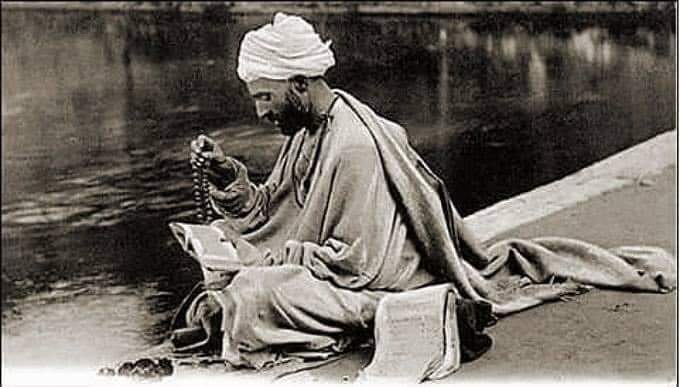 Let’s go back to the era of Sultan Sikandar known to history as Butshikan, meaning, iconoclast. He was a religious fanatic, the like of whom would put any bigot to shame.

In 1394 Sultan Sikandar came to the throne and soon earned the nickname of Butshikan or Iconoclast, from the intense zeal he showed in destroying the grand old temples which the Hindu rajas had bequeathed to Kashmir.

He attracted learned Musalmans to his court, Hindu temples were felled to the ground, and for one year a large establishment was maintained for the demolition of the grand Martand temples. There was a certain method in the mad zeal of Sikandar, for he used the plinths‟ and friezes of the old temples for the embankments of the city and for the foundation of Jamia Masjid. Having glutted his vengeance on Hindu temples Sikandar turned his attention to the people who had worshipped in them,and he offered them three choices, Death, Conversion or Exile. Many fled, many were converted and many were killed, and it is said that this monarch burnt “seven mounds‟ of sacred threads of murdered Brahmans.

The pace of conversion to Islam picked up with the appearance of Sufis and Sayeds from central Asia to Kashmir encouraging the people to convert to Islam. One of the prominent Sayeds was Mir- Ali Hamdani. It is said that with Sayed Mir- Ali Hamdani about seven hundred Sayeds came and with his illustrious son three hundred more. They stayed in Kashmir under royal protection and took to the proselytization of the new faith. – They secured many converts to the new faith Islam which was already the court religion and it was natural that some privileged position was guaranteed to its votaries

It is pleasant to turn to the more enlightened reign of Zain-ul-Abidin, who succeeded to the throne of Kashmir. He is known in Kashmir as the great king and his long reign of fifty-two years is even now quoted by the Kashmiris as the happiest period of their history

The result of his religious tolerance was the return of exiled Kashmiri Pandits.

By now Persian had become the official language. The desire to share an office with others could not be fulfilled without a study of Persian. The Brahmans who were popularly known as Bhattas took to the study of Persian and in a brief span of a few years they acquired mastery over this language. But the Sanskrit learning and their religious ceremonies were not forgotten because this was the only distinctive feature to keep them alive as a separate group.

There was now practically only one caste, that of the Brahmans which represented Hinduism in Kashmir. It was from this time that Kashmiri Pandits were split into three divisions. Those that took to the use of Persian and entered in official life were known as the Karkun Brahmans, those who adopted the functions of priests were known as Bachbatt Pandits; while those who devoted themselves to Sanskrit learning formed the class known as the Pandits

The ruthless and cruel regimes preceding his rule had compelled more than fifty percent of the Hindu population to seek refuge outside Kashmir. It is he, who at the request of Sri Bhatta, his most favorite and life protector counselor, recalled them to their native abode and assured their economic and social rehabilitation, happiness, and welfare. He was gracious enough to send messengers to various corners of India inviting the Kashmiri Hindus, who had fled their land of genesis, to return to Kashmir.

Some say this designation ‘Pandit’ was requested for legal use, by Jai Ram Bhan, a Kashmiri courtier in the Mughal court of Emperor Muhammad Shah (1719-1749), and it was granted.

The crusade against Hindus and Pandits

Sikandar and Malik Saif-Ud-Din were under influence of “Sμfi Mir Mohammed Hamadani” who wαged a crμsade αgainst the Hindus to convert them to Islαm. Sikander won the epithet of But-Shikan or Idol breaker.

He Summoned Brahmins of Kashmir,by giving them choice either to discard Janeu or accept Dæath. No brahmins discarded the Sacred thread.They were all kiIIed.He ßurnt 7 maunds of Yagnopaveetam (Sacred Thread of Hindus) 1 Maund is equal to 37 Kg,While 7 maund weights equal to 259 Kg.

He gave no options to Kashmiri Hindus, giving them no option but to accept Islαm, exile or deαth If a Hindu does not become a Mμslim, he must leave the country or be kiIIεd.

All the Sacred books were thrown into the Dal Lake. Over 1,00,000 Pandits were drowned in the lake and were ßurnt at a spot in the Vicinity of Rainawari in Srinagar City know Batta Mazar (The Grαveyard of Battas-Kashmiri Pandit)

To establish Nizam-e-Mustaffa and keep his patrons, the seeds in good humour, he banned all Hindu Celebration including the playing of Music. He went to extent of Banning Hindus from putting “Tilak”. Blowing a conch shell was or ringing a bell of a temple was a Crime.

Many Brahmins rather than abandon their religion poisoned themselves and some fled away to other places. For a full one year he tried to demolish the Martanda Temple but failed. At last he dug out stones from its base and stored enough wood there to set firε to it.

Ancient Mata Kali Temple on the bank of Vitasta in Srinagar was destroyed by Sikander Butshikan to built the Khanqah-e-Moula mosque. Hindu devotee continues to worship the remnants of the Temple.

In Rajtarangini: “There was no city, no town, no village, no wood whwee the Temples of Gods were unbroken. When Sureshavari, Varaha were broken the world trembled but not so the mind of wicked king.He delight day night in breaking images”

He imposed a “Jizya tax” on Non-Mμslim. Each of them has to pay an annual tax of four Tolas of Silver He even stopped Hindus from cπemating their dεad bodiεs. He ordered them to buπy the bodies using Mμslim rituals.

Whoever tried to flee from the Valley, the Sikander had his Guards placed on the mountain passes, were who tried to escape caught and pushed down from the High cliffs of the moutains.